SILVER WOLF, the second book in the Sworn Saga and the sequel to RED RIDER, is now available on Amazon! 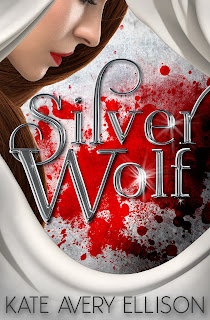 Meredith Rider, known as Red, has been captured once more by Sworn soldiers and taken to the capital of the werewolf empire. There, she is forced to train with a group of other captive girls in the arts and graces of the Chosen, the unlucky human girls whose DNA is compatible with that of werewolves.

Red isn't about have babies for the enemy. She's going to escape or die trying.

And her conflicted feelings for the darkly handsome, cruelly cunning Vixor Rae, the Sworn champion of the Alpha who goes by the nickname Silver Wolf, are only going to get in her way.


I hope you all love it as much as I do. I put my heart and soul into every book, and this one took a lot from me. I hope you all find it deliciously heartbreaking and delightful and everything in between.
Posted by Kate Avery Ellison at 9:06 PM 1 comment: