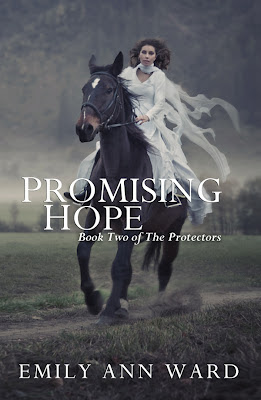 Here's the cover of the first book for comparison:

And here's the blurb for Promising Hope:

The curse is broken, but the war isn't over. Grace is under the spell of a love potion, torn between her obsessive love for the prince and her calling to protect Dar and the shape changers. Though Dar wants nothing more than her freedom, he's being held as a prisoner in the palace and watched at every turn. Miles away, Sierra is the reluctant savior of the shape changers as she tries to keep Evan alive in his lust for blood.

Grace and Dar struggle to make the political alliances needed to bring the shape changers back home while dealing with new doses of the love potion. But the king sides with the Protectors, who are willing to do anything to keep the magic away, even controlling the kingdom. When the man who cursed the shape changers ten years ago reappears at the castle, the Avialies abandon their attempts at peace in order to keep their family's future secure. The consequences of their actions catapult a sequence of events that threatens Grace, Sierra, and the Avialies in ways they could have never prepared for.

In this sequel to Promising Light, the war is just beginning, and no war is without casualties.

Check out the first book, Promising Light, if you haven't already!

Grace, a young noble, must decide whether to help a shape changer family break a curse set on their family by the powerful Protectors.
Posted by Kate Avery Ellison at 9:51 PM