My Everyday Magic (a guest post by Kai Strand)


Harry Potter. The boy who lived. Whose walk through the forest reduced me to
tears. Who was so angsty (in the fifth book), I was actually crabby while reading
it. Harry and I met after his fourth book (my favorite) was released. It was the
summer before my daughter was to enter fourth grade. She wasn’t reading much
and it broke my heart that she hadn’t yet discovered the euphoria of escaping to
another world to spy on some one else’s life. I’d heard loads about the Harry Potter
books and decided there had to be something there for so many around the world to
make such a big deal. So, I decided to lead by example. I checked out the first book
from the library and started reading it. I plowed through it and jumped right into
the second. My daughter, brow scrunched, picked up the first book and she started
reading. That summer she and I tore through all four books. We were absolutely
hooked and anxiously awaited the release of the fifth book, still a year and a half
out.

During that year and a half wait, I became so impatient that I decided I’d keep
myself busy creating my own world and my own characters and steep myself in
a fantasy of my own making. The first thing I dreamed up was an underground
transportation animal. Then I thought, “What would such an animal be used for?”
“Where would it take people?” “Who are those people?” and a writer was born.

It took more than a year of listening to my daughter and I obsess about Harry Potter
before we were able to hook the rest of the family. We discovered books on CD and
listened to Jim Dale’s wonderful readings on long trips. We would bring portable
CD players so that we could bring the story into hotel rooms with us in the evening.
If the trip finished before the book, we’d bring it into our own living room and sit
together to listen until the story was complete, often planning complete evenings
around it.

I took my daughter to midnight book releases; selfishly buying two books so that she
and I could both start reading immediately. My daughter and I went to the midnight
release of the third movie together. When the fourth movie was due to release, my
son was struggling in school and I told him if he focused and pulled up his grades, I’d
take him with us to the midnight release. It was so effective that the morning after
we saw that movie, I had to wake my son early and drag him to school because his
teacher was honoring him with a “Turn Around Kid” award.

But the every day magic of Harry Potter really hit home one day when my niece and
I were at a family Potter party for the release of the seventh book. Even though I’d
frizzed my hair, was draped in scarves and wore glasses so thick I was running into
furniture, she and I had a quite and serious moment together where she explained
that she’d discovered the books while she was battling breast cancer. The stories
whisked her away from her reality. While she visited Hogwarts she successfully
forgot about nausea and hair loss. Yes, that is magic. God bless you, Ms. Rowling.

You don’t have to write at the level of success as Harry Potter for your stories to
instill everyday magic in the lives of a reader. Each story, when released into the
world, affects readers in different ways. But when it resonates with its reader, it is
magic. When a story, or blog post, or birthday card I’ve written finds its perfect fit
with a reader, I feel as magical as Harry himself.

Harry has started a lifelong reader in my daughter, given me precious family time,
inspired me to become a writer, motivated my son to focus in school and provided a
blessed escape for my niece during a dark time. It is just a book series. But one full
of magic inside and out.

Now go out and have your own magic. I hope you can find a spark of it in one of my
books.

About SAVE THE LEMMINGS: 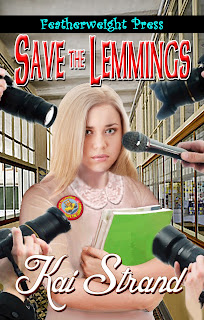 8th grade inventor, Natalie Isabelle Cailean Edwards is
the N.I.C.E. girl who finishes last with the kids in school. Sappy inspirational phrases and monochromatic outfits have all but her best friends wrinkling their nose at her. When Natalie’s invention, the Texty-Talky, goes nationwide, she becomes an overnight
sensation.

Suddenly her days consist of photo shoots and interviews with little time left for her friends. A local reporter shatters her good-girl image by reporting a graffiti incident and the media launches into a smear campaign. It is so bad, even her friends start to believe the stories. Will Natalie be able to overcome the lies being printed about her? And will she be able to SAVE THE LEMMINGS?

BUY IT ON AMAZON! 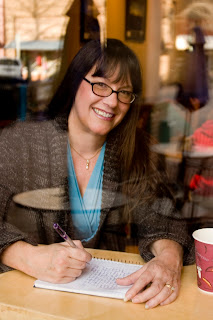 Her debut novel, The Weaver, was a finalist in the 2012 EPIC eBook Awards. The Wishing Well: Another Weaver Tale is set in the same storytelling village as The Weaver. She is a (very lucky) wife and the mother of four amazing kids. The most common sound in her household is laughter. The second most common is, "Do your dishes!" She and her family hike, geocache, and canoe in beautiful Central Oregon, where they call home.

To find out more about Kai’s books, download companion documents, find links to her published short stories and discover all the places to find Kai both virtually and in person, visit her website: www.kaistrand.com. She loves to hear from readers, so feel free to send her an email or visit her facebook page, Kai Strand, Author.
Posted by Kate Avery Ellison at 9:04 PM